This piece is sold

This Journal Quilt is from a theme way back in March 2011.  The theme was to be: “Something Significant in March”.  Well, nothing significant happened in March 2011!  So I left this theme to idle for a whole year, until;

That storm that happened on the West Coast in March 2012.  The wind came out of an unusual corner and whipped around the islands like frenzy.  Hurricane force gusts hit the mid coast.  Countless large trees were laid flat, storm surges sent rocks over roadways, branches everywhere.  On the bluffs near our place I counted 32 trees down, mostly pine poorly anchored to the rocks.  We also lost a very large 3 foot diameter Douglas fir.
Now that's significant. 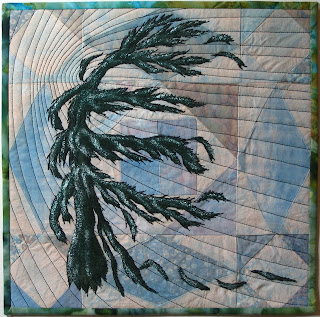 I started with a 12 ½ piece from a storm at sea quilt top that I had deemed inferior. I must have thrown this old quilt top away at least 6 times. I keep retrieving it from the garbage can at the last minute. I took a square out of the top and prepared it ages ago thinking it might turn into a journal quilt one day. What I did was paint it with gesso and white acrylic paint to tone it down and stiffen the fabric. Then I overpainted with blue acrylics and so it sat.

Then we had THAT STORM in March and I knew what I would do with it. Meanwhile I received a phone call from the bus depot saying there was a large/heavy tote box waiting for me; prepaid. Inside was a treasure trove of upholstery fabrics courtesy of my brother. And so the tree was born out of a piece of fuzzy evergreen upholstery. I fused it onto the background and then freemotion zigzagged around the edges. It looked a little plain so I added some irridescent turquoise fabric paint to highlight the glistening branches. The backing is denim, and the quilting is done in ‘isobars’ to accentuate the force of the wind.

Here is a close-up: 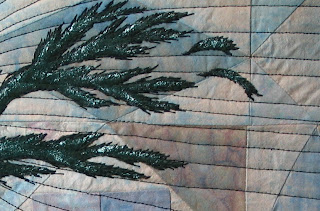 ﻿I entered this little art quilt into our local fall fair and I can't beleive the attention it got.  For some reason it grabbed people.  I think it must be the action and movement, or suggestion of movement that does it, because the colours aren't particularly striking, I don't think.  I received a phone call and an offer to buy it, so it's no longer mine, but look out for more in this series of stormy trees because I still have more of that old quilt left!
Posted by Unknown at 10:14